← more from
RareNoise Records
Get fresh music recommendations delivered to your inbox every Friday.

Soul Of An Octopus 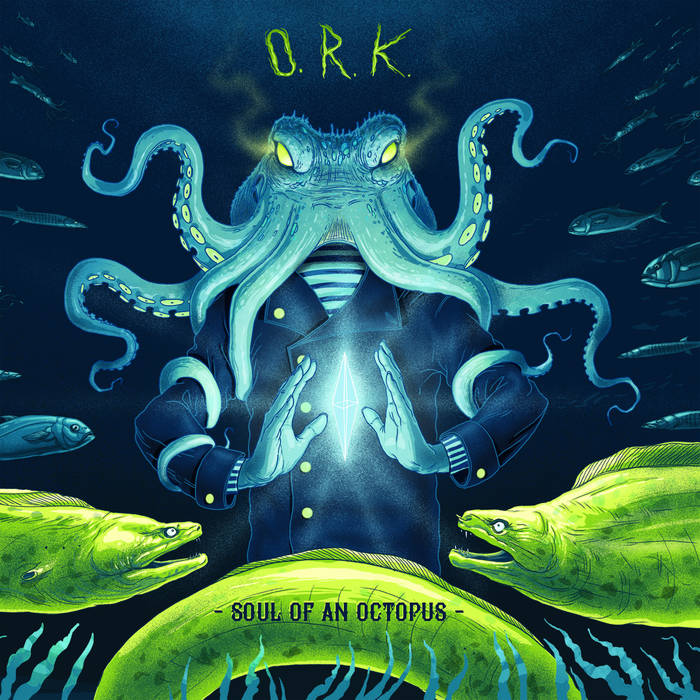 Peter Van Bavel Ordered this album on vinyl and forgot to ask for signed copy.
Marvelous album with vocals that sometimes remind me of David Sylvian in the old Japan-style.
Many layers, many thanks. Favorite track: Dirty Rain.

Following on the heels of 2015’s captivating Inflamed Rides, the members of the powerful collective O.R.k. — lead singer Lorenzo Esposito Fornasari, Porcupine Tree bassist Colin Edward, Mart Sui Tubi guitarist Carmelo Peptone and King Crimson drummer Pat Mastelloto — were primed to deliver an even more potent statement for their sophomore offering. Coming off of a triumphant tour of Europe and South America, they were charged to take things up a notch. And so it was with Soul of an Octopus, their second recording and RareNoise debut. This one finds the four kindred spirits dealing in even deeper waters. “After Inflamed Rides we did around 30 shows in Europe, Argentina, Chile and Mexico this year,” says Fornasari. “That definitely helped us to reign in our sound and get to a more focused mutual vision. So all the pieces from the new album represent an honest and effective picture of who we are as O.R.k. right now. That said, people who have listened to the new stuff - included our booking agents - think this is at least four times more powerful and intense than Inflamed Rides.”

Because of the presence of drummer Mastelloto, it would be easy to draw comparisons to King Crimson for this project. (The opener “Too Numb” in particular has a kind of Discipline vibe in its interlocking ostinatos that create a hypnotic latticework pattern against Fornasari’s menacing vocals). One can also hear traces of such artistically inclined groups as Pink Floyd in ambitious tunes like “Scarlet Water,” “Just Another Bad Day” and the extraordinary “Capture or Reveal.”
But O.R.l. draws on a myriad of other influences throughout Soul of an Octopus that encompass prog-rock, free jazz and even bits of opera, as can be heard in Fornasari’s dramatic and wide-ranging vocals on tunes like the intense closer “Till the Sunrise Comes” and the epic 40-minute suite “Dirty Rain.” Says the native of Bologna, Italy, “I got a degree as opera singer, but when it comes to my music I try to forget what I've been taught. When I find myself working on new material I prefer to improvise and sing without thinking what to do or where to head to, at least that's what I do in first place.”

On the extreme opposite end of the dynamic scale from the operative sweep that he delivers throughout Soul of an Octopus, Fornasari takes a more intimate, close-mic approach at the outset of the poetic “Heaven Proof House,” recalling the enigmatic whisper vocals of the late Leonard Cohen. “Since I think at myself as a composer and producer first and then as vocalist, I get my brain to rethink the whole structure and listen to my vocals as a producer would do,” he explains. “I tend to give my vocals the same importance I'd give to any of the other instruments composing the whole structure.”

Innovative Italian guitarist Pipitone is prominently featured on “Collapsing Heroes,” which opens with some gutbucket acoustic blues guitar and gradually builds to a slamming wah-wah fueled six-string onslaught. Says Fornasari of his O.R.k. bandmate, “Carmelo has received multiple awards from music Italian critics because of the way he plays acoustic guitar. He makes his strings bark and scream like the most ferocious electric piece of guitar and a second later he makes you cry with the most intense clean arpeggio. The very first time I've seen him playing with his other band Marta Sui Tubi — they’re quite famous in Italy — I thought, ‘Hey! I want to make some noise with this crazy horse!’ And here we are.”

Fornasari further describes the process that he and his O.R.k. bandmates took on this RareNoise release: “We usually start the process from guitar or bass riffs, I assemble a rough structure and send it over to the other guys. This collaborative back-and-forth process across the miles is very effective in our case. Nonetheless, it usually takes weeks or even months before a piece gets to its final shape. We don't follow any pre-defined plan though. One of the most intriguing elements in music is the most unpredictable too — once you release new stuff you never know how people will react and interpret your sound and words.”

While Fornasari has also been involved in other projects for RareNoise Records (he was on Owls’ 2011 release, The Night Stays, Berserk’s self-titled 2013 debut and Obake’s 2015 release Mutations), he considers O.R.k. to be the focus of his artistic endeavors right now. “I love Berserk! and Owls but I see them as collaborative side projects while O.R.k. is actually my main band. It’s the one which best represents my vision in music and the one I'm dedicating most of my of time and energy to.”

Fornasari clearly poured his heart and soul and all of his energy in this band. If you can’t catch O.R.k. in action live, check out their imposing sophomore release, Soul of an Octopus, which stands as one of the more intensely compelling recordings in the RareNoise roster.

Soul Of An Octopus

Bandcamp Daily  your guide to the world of Bandcamp